Pakistan hosts a wide range of ecosystem / habitat types and associated biological diversity due to its unique geographical and climatic conditions. There are snow covered peaks,  permanent snowfields, lush green as well as barren mountains, forests, irrigated plains, riverine tracts, sand dunes and deserts and coastal areas. For the conservation of such natural
assets, a national government declares some specific areas as the protected areas. Protected areas  are thosewhere the representative ecosystems, fauna and flora are protected and maintained under the natural conditions. Five categories of protected areas have been recognized in Pakistan that include; national parks, wildlife sanctuaries, game reserves, private game reserves and community controlled hunting areas / community conservation areas.

A national park is not like a citypark or public garden with fenced boundaries and having play grounds, picnic spots, jogging and walking tracks etc. Rather it is a reserve of land usually declared and owned by a national government, meant for the protection and preservation of the outstanding scenery, natural landscape, majestic and awe inspiring  places, natural flora and fauna in natural state and protected from hunting, cutting of vegetation, developmental activities and pollution.

The idea for the establishment of a national park came from William Wordsworth (1810), who described the Lake District as a sort of national property, George Catlin (1832), who wrote about preserving the Native Americans in a magnificent park – A nation’s park containing man and beast in all the wild and freshness of their nature’s beauty. The first practical effort by any government was in USA on April 20, 1832, when President Andrew Jackson signed the legislation to establish Hot Spring Reservation in Arkansas to protect the natural, thermal springs and adjoining mountainsides. The next effort was again in USA on June 30, 1864 by President Abraham Lincoln ceding the Yosemite Valley and Mariposa Grove to the state of
California. The first ever national park in the world was Yellowstone National Park (USA) established in 1872. 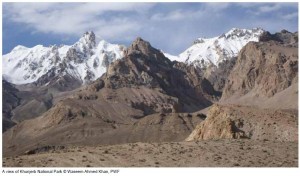 Purpose and Objectives of National Parks

Protection of biodiversity is the main purpose for the establishment of a national park however, being biologically, geologically and culturally important, the national parks also serve to cater for education, recreation and scientific purposes for the public. People visit the parks to see and share the wonders of their land and to learn about the forces and the people who have shaped it through the centuries. Outstanding scenery, majestic places, natural flora and fauna in natural state renders positive impacts on visitors’ mind thus helping divert a nation’s attitude towards a healthy tract. National parks ensure the preservation of national natural heritage, culture and monuments, and present them to the public.

Due to the growing threats to nature like global warming, population expansion, habitat destruction and worldwide reduction of biological diversity, the national parks are now being considered as the ecological laboratories, gene pools and bulwarks against the irreversible change or the loss of species and hence, preserving the nature and ensuring the ecological health of the planet. National parks are the ideal places for eco-tourism, tracking, bird and animal watch and nature photography. National parks with their lush green forest components neutralize the carbon emissions in the surrounding environments.

Acknowledgement
While preparing the manuscript of this article, E Journal USA (Vol. 13, No. 7) of US Department of State / Bureau of International Information Program was consulted..