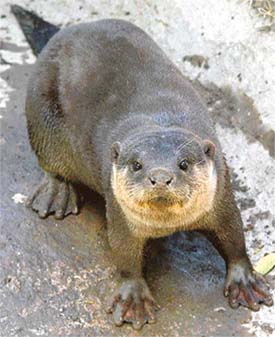 The present report reveals the findings of surveys conducted jointly by Sindh Wildlife Department (SWD), Government of Sindh and WWF Pakistan, Islamabad (WWF-P) during November-December, 2008 and February 2009 with the objectives to confirm the existence of Smooth coated otter (Lutrogale perspicillita sindica) in different areas in Sindh and to identify various threats to otter population. An area of about 5,000
km was traversed covering 36 different sites in 12 districts of Sindh province where there were reports of otter existence. The existence of otter was confirmed at 25 sites in 11 districts. Evidence like recent otter tracks, remains of fish eaten by otter, otter spraints, and holts was gathered and local residents and fishermen were interviewed to verify the existence of otter at every site. Five sites located in four different districts were identified
where an otter population exists throughout the year, whereas otters visited all the other sites occasionally over different seasons, in search of food. Various threats to the species identified during the surveys included hunting for fur, habitat degradation, water
pollution, weak enforcement of wildlife laws, increasing tourism and competition and conflicts between otters and fishermen. The total population of Smooth coated otter was also estimated over the 25 sites as 178.

Status of Smooth-coated otter in Pakistan

A review of the available literature on Smooth coated otter (Lutrogale perspicillata sindica) has been made covering its nomenclature, status, distribution, biology, habitat, behavior, ecology, ecological role, food and feeding habits, breeding, territory size and various threats. Out of 13 species of otters Pakistan hosts only two; smooth coated otter (Lutrogale perspicillata sindica) and Eurasian or common otter (Lutra lutra). Smooth coated otter is
called “Oodh Balao” in Urdu language and the sub-species found in Pakistan is known as Sindh otter. The status of the species has recently been declared as vulnerable in Pakistan by IUCN. It prefers plain areas and is widely distributed in Sindh, some parts of the Punjab and a few places in Khyber-Pakhtunkhwa along Indus River. The nocturnal mammal is adapted to a semi aquatic mode of life. Average body weight is seven kg, head and body length 61 cm and tail length around 40 cm. Smooth coated otter is a top carnivore of wetlands and feeds mainly (up to 96%) upon fish. It is considered to be a suitable indicator of pollution level in a wetland. The animals form strong monogamous pairs; males are larger but still females dominate the pair. Breeding may occur throughout the year, gestation period varies from 61-63 days and young ones at their birth are covered with fur and their eyes do not open until up to 10 days. The weaning takes almost 130 days and the young ones start taking fish at the age of three months. Liter size of 2-4 cubs is
normal and rarely five but recently six cubs have been observed in Sindh. The home range varies from 7-12 km2 depending upon the availability of food and other basic attributes of the habitat. Habitat fragmentation, otter-human conflicts, hunting for skins and lack of awareness among general public are main threats to the species.