Was that a first record of Tibetan Lark in Pakistan ? 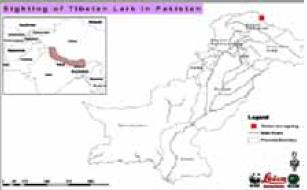 The difficult mountainous terrain of extreme northern Pakistan is short of data on birds. Mr. Shahid Iqbal along with Mr. Waseem Ahmad Khan and Syed Shamim Fakhri were conducting a two-week baseline avian survey in Shimshal valley in Khunjerab National Park during July 2009. We observed a flock of eight larks, which appeared larger than other lark species in Pakistan. These were about the size of a common starling. That excited us, as we thought it could be Tibetan Lark (Melanocorypha maxima). We were watching these birds on ground from
35 to 40 meter distance and it was snowing light so the visibility was not very clear. The Length of the wing in this species reaches almost to the tip of the tail, which could not be noted, nor could we note the tail feathers, which are broadly white tipped, except the middle pair and the outer most feather is nearly white. There is a similar lark Melanocorypha bimaculata that also occurs in the same area, but its size is little bigger than a House Sparrow. Underparts of both the species are white. We attempted to photograph it twice but the flock was shy of our photographer and flew away each time he attempted to advance. Perhaps it was Tibtan Lark, a new bird record for Pakistan.