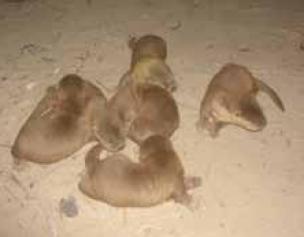 Smooth coated otter (Lutrogale perspicillata) is a semi-aquatic mammal belonging to the Order Carnivora and Family Mustellidae. It is known as “Oodh Balao” in Urdu language, “Ludhro” (singular) and “Ludhra” (plural) in Sindhi language, “Ludhar” in Punjabi and “Khuwarr Spay” in Pushto language. It inhabits freshwater wetlands, including canals, rivers, lakes etc. and tends to be very secretive and shy in nature. It is nocturnal in habits but social and gregarious. Its food mainly (96%) consists of fish. It is distributed in Punjab, Sindh and a few areas in Khyber Pakhtunkhwa near DI Khan along Indus River. According to literature, (Roberts, 2005), four cubs per litter are common among Smooth coated otter and five in rare cases. However, more than five cubs per litter have never been reported  among Smooth coated otter. During a study in 2010 in Sindh Province funded by Indus For All Programme of WWF Pakistan, six otter cubs per litter were found at two different places; first near Jamrau Headwork in Khairpur District and secondly, around Chotiari Dam in District Sanghar. According to the local residents, six otter cubs per litter is a common observation in the study area.