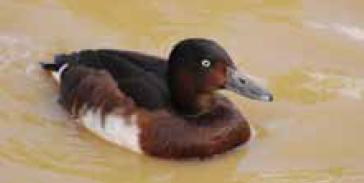 Mr. Sakhawat Ali, a research scholar in Prof. Z. B. Mirza’s team while studying the ecological linkages of fauna and flora of Chashma Barrage under a WWF Pakistan funded project, sighted a Baer’s Pochard (Aythya baeri) along the eastern flank of the Barrage on 9th February 2012. The Pochard was sighted in the middle of a sitting flock of over ten thousand ducks which were
being counted by him along with two Kinnaird College M. Phil. scholars Ms. Azubah and Ms. Kamni. Mrs. Mirza also thoroughly watched it through the spotting scope fitted on a tripod. The Pochard was a male and seemed molted to breeding plumage with black head and neck which blended into maroon-chestnut of the breast. This is a second record of its occurrence in Pakistan. In 1957 a specimen was shot in a pond area in district Gujrat by Brig. Haider. It is winter visitor to eastern part of India and other far eastern countries.